Elia’s work demonstrates her enormous need to test herself in many ways and places. This playing with fire began at the University of Costa Rica when she formally began studying theater, but it did not consume itself and burn out then. So she fled to the United States, where she joined the ranks of those who had illegally immigrated, and, through winding paths, she arrived at cinema, performance art, poetry, installation art, video, photography, experimental theater, and, at some point, legality. She has worked alone (I Have So Many Stitches That Sometimes I Dream That I’m Sick; Stretching My Skin Until It Rips Open), in groups (The Party, the play she directed with the Sacred Naked Nature Girls group; the play Jupiter 35, co-directed with the LAPD), with diverse communities (With Our Breasts on the Table), and with other artists (Unchanging Evidence of Identity). 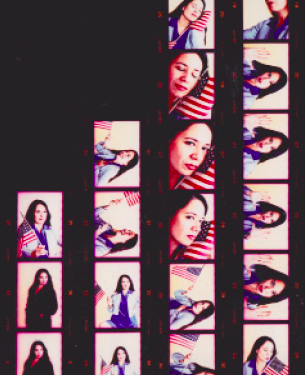 The constant change in geography has led her to radical moves of various kinds. While in Wyoming, at the beginning of her voluntary exile, she debuted her immigrant status, and her next port, New York, led her to think beyond theater and to explore cinema. It was in Los Angeles where she changed genres––from theater to performance art––as can happen to anyone who travels. Later, when she lived in the Joshua Tree desert, she shifted to performance art that uses the surroundings as stage (First Woman on the Moon), and when she arrived in Houston, she said goodbye to “genres” and jumped into promiscuity. Her work is sometimes labeled as live performance (Death Count), video/painting installation (Tricorn Black; The Golden Era), photo performance (The Gulliver Series), video performance (The Mourning of the Pin-up Girl), participation art (Sexy Attack, with Performance Art Lab), sculpture performance (The Long Count), live installation (Light Green, Dark Green), performative installation (The Violence of Certainty), or shown without a name.

It is easy, therefore, to see who has influenced her. You need only look at her work to add to the growing list: dolls (Bread and Puppet Theater), transvestites and homeless people (The Los Angeles Poverty Department group), hotel maids (Make Up Room, Please Do Not Disturb), soldiers with souls mutilated in Iraq (The Fifth Commandment), people affected by HIV (Don’t Tell Anybody), elderly black women who manufactured hats on the Atlantic coast (The Gulf Coast Art Corridor and Project Row Houses), poets and people from the neighborhood (The Fruitvale Project), to mention only a few. Other influences came from people like her, of diverse origins, who have found in performance art a way of turning their bodies––inflamed by the dynamics of immigration, racism, sexism, homophobia, and other issues––into political fields for permanent action. Elia now lives in Costa Rica, to which she returned only to regenerate cells, because there is no point of return from performance art.Once it has been touched, death is nothing but a new geography.